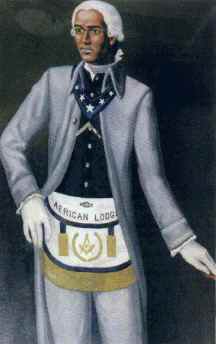 Prince Hall is recognized as the Father of Black Masonry in the United States. Historically, he made it possible for African Americans to be recognized and enjoy all privileges of free and accepted masonry.

Many rumors of the birth of Prince Hall have arisen. A few records and papers have been found of him in Barbados where it was rumored that he was born in 1748, but no record of birth by church or by state, has been found there, and none in Boston. All 11 countries were searched and churches with baptismal records were examined without finding the name of Prince Hall.

One widely circulated rumor states that “Prince Hall was free born in British West Indies. His father, Thomas Prince Hall, was an Englishman and his mother a free colored woman of French extraction. In 1765 he worked his passage on a ship to Boston, where he worked as a leather worker, a trade learned from his father. During this time he married Sarah Ritchery. Shortly after their marriage, she died at the age of 24. Eight years later he had acquired real estate and was qualified to vote. Prince Hall also pressed John Hancock to be allowed to join the Continental Army and was one of a few blacks who fought at the battle of Bunker Hill. Religiously inclined, he later became a minister in the African Methodist Episcopal Church with a charge in Cambridge and fought for the abolition of slavery.” Some accounts are paraphrased from the generally discredited Grimshaw book of 1903.

When the British Army left Boston, this Lodge, # 441, granted Prince Hall and his brethren authority to meet as a lodge, to go in procession on Saints John Day, and as a Lodge to bury their dead; but they could not confer degrees nor perform any other Masonic “work”. For nine years these brethren, together with others who had received their degrees elsewhere, assembled and enjoyed their limited privileges as Masons. Finally in March 2, 1784, Prince Hall petitioned the Grand Lodge of England, through a Worshipful Master of a subordinate Lodge in London (William Moody of Brotherly Love Lodge # 55) for a warrant or charter.

The warrant was granted on September 29, 1784 under the name of African Lodge, # 459 on the register of the Grand Lodge of England by authority of then Grand Master, the Duke of Cumberland, delivered in Boston on April 29, 1787 by Captain James Scott, brother-in-law of John Hancock and Master of the Neptune. Prince Hall was the first Master of the lodge which was organized one week later, May 6, 1787.

The warrant to African Lodge # 459 of Boston is the most significant and highly prized document known to the Prince Hall Masonic Fraternity. Through it, Masonic legitimacy among free black men is traced, and on it more than any other factor, rests their case. That charter, which is authenticated and in safekeeping, is believed to be the only original charter issued from the Grand Lodge of England still in the possession of any Lodge in the United States. African Lodge allowed itself to slip into arrears in the late 1790’s and was stricken from the rolls after the Union of 1813 although it had attempted correspondence in 1802 and 1806. In 1827, after further unreplied communication, it declared its independence and began to call itself African Grand Lodge # 1. It is interesting to note that when the Massachusetts lodges which were acting as a Provincial Grand Lodge also declared themselves an independent Grand Lodge, and even when the present Grand Lodge of Massachusetts was formed by the amalgamation of the two separate lodges, African Lodge was not invited to take part, even though it held a warrant every bit as valid as the others.

The question of extending Masonry arose when Absalom Jones of Philadelphia, Pennsylvania appeared in 1791 in Boston. He was an ordained Episcopal priest and a mason who was interested in establishing a Masonic lodge in Philadelphia. Delegations also traveled from Providence, Rhode Island and New York to establish the African Grand Lodge that year. Prince Hall was appointed Grand Master, serving in this capacity until his death in 1807.

In 1869 a fire destroyed Massachusetts’ Grand Lodge headquarters and a number of its priceless records. The charter in its metal tube was in the Grand Lodge chest. The tube saved the charter from the flames, but the intense heat charred the paper. It was at this time that Grand Master S.T. Kendall crawled into the burning building and in peril of his life, saved the charter from complete destruction. Thus a Grand Master’s devotion and heroism further consecrated this parchment to us, and added a further detail to its already interesting history. The original Charter # 459 has long since been made secure between heavy plate glass and is kept in a fire-proof vault in a downtown Boston bank.

The ties were arranged to be formalized in June 1996. In its 212 years, the Prince Hall Grand Lodge has spawned over 44 other Grand Lodges. The subordinate lodges receive recognition once their grand lodges are recognized.

Today, the Prince Hall fraternity has over 4,500 lodges worldwide, forming 44 independent jurisdictions with a membership of over 300,000 masons whereby any good hearted man who is worthy and well qualified, can seek more light in masonry.

Prince Hall is buried in a cemetery overlooking the Charlestown naval yard in Boston’s north end. His grave is situated near a large tree, his wife’s grave is directly behind his. The site is marked by a broken column; a monument erected 88 years after his death by Most Worshipful Prince Hall Grand Lodge F. & A.M. of Massachusetts. Still today, believers in the Deity and travelers from all walks of life can be seen winding their way to that sacred spot to pay homage at the final resting place of the first Grand Master of the African American Grand Lodge of Masons. This great Mason, Statesman, and Soldier, having traveled to that undiscovered country from who’s bourne no traveler returns; remains as the pillar of wisdom, strength, and beauty among all masons today.